Most successful evangelism strategy in the Bible

The story of the Bible is the story of God offering salvation to everyone in the world. Here about method.
Ten sections to this page
1. Purpose of this study
2. Doctrine of original sin
3. Why it matters
4. Origin of the doctrine
5. Concept of federal head
6. Foundational verses
7. Deep Bible study Romans 5
8. Deep Bible study I Corinthians 15
9. What Jesus said
10. . Eleven reasons against doctrine

Why this is important

The Apostle Paul (Saint Paul) was the greatest missionary of all time, and this study is about what we can learn from his biggest evangelistic success.

This is the only time we see how Paul put into action everything he had learned from more than 30 years of experience in presenting the gospel to unbelievers and doubters in different cultures.

This is the story of Paul and the Hall of Tyrannus he rented in Ephesus. It is a powerful model for evangelism today, revealed in the pages of scripture.

Most under-told big story in the Bible

Arguably, this is the most under-told big story in the entire Bible. It's big because it is the core of what Jesus told us to do (Great Commission, Matthew 28:18).

Ask most Christians – even pastors – what they know about the Hall of Tyrannus, and all you'll get is a blank stare. Why? No particular reason. Christian tradition just hasn't deemed it to be important – probably because it's about process rather than doctrine – and most Christians don't read the Bible carefully enough to discover the power of this story for themselves.

There is no human endeavor recorded anywhere in the Bible that has had more spiritual impact on more people in shorter time than the Hall of Tyrannus!

Why Paul did it only once

There is no record of Paul using this model of evangelism more than this one time in 56-57 AD in Ephusus (present-day Turkey).

‍If the model was so good, why didn't he use it again ... and again ... and again? Because his life was cut short ... this was his third and final missionary journey ... Hall of Tyrannus was his last big thing ... like his grand finale ... before sailing back to Jerusalem ... where he was arrested ... and sent to Rome as a prisoner ... and executed.

Man on the move 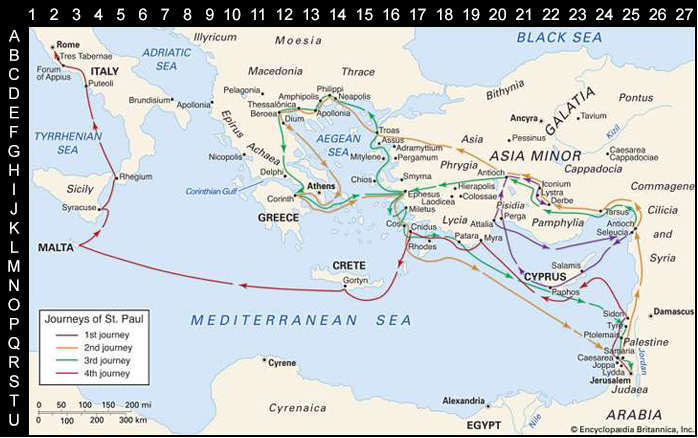 ►Age 30, after his conversion (year 35 AD) near Damascus (map O26), Paul escaped the wrath of Jews who wanted to kill him by fleeing to Arabia (map R27) where he resided for three years.

►Age 33, Paul returned briefly to Damascus, visited apostles in Jerusalem (map S25) for two weeks and then, still fleeing hostile Jews, went to Tarsus (map J25), his family home town. He lived in Tarsus for eight years before going to Antioch (map K25), where he began his first missionary journey.

The Bible tells little about what Paul said or did during those first eleven years of his Christian life. He didn't start out as a world-changing evangelist, but he had a clear understanding that he was called to be a missionary to the Gentiles (non-Jews). At that time, most people thought that Christianity was just a new sect with Judaism.

►Age 58, the book of Acts and biblical story of his life ends with Paul in Rome under guarded house arrest, but he was free to have visitors. Acts concludes with these words: 'For two whole years Paul stayed there in his own rented house and welcomed all who came to see him. Boldly and without hinderance he preached the kingdom of God and taught about the Lord Jesus Christ' (Acts 28:30).

NOTE: All dates and ages are approximate to within plus or minus three years. No one knows precisely.

Scholars have studied Paul's routes and transportation modes and have generally concluded that on his three missionary journeys (just getting from city to city per map above) – nine years time – he traveled approximately 3,400 miles by foot and 3,100 miles by sea, not including intra-city travel and side trips.

That was an enormous amount of travel for anyone at that time!

Travel then was slow, dangerous and very exhausting. Here's how Paul expressed it: ' ... three times I was shipwrecked. I spent a night and a day in the open sea. In my frequent journeys, I have been in danger from rivers and from bandits, in danger from my countrymen and from the Gentiles, in danger in the city and in the country, in danger on the sea and among false brothers, in labor and toil and often without sleep, in hunger and thirst and often without food, in cold and exposure' (I Corinthians 11:25-27).

Paul was almost always on the move because he had so many cities to visit and so many people to see. Usually he didn't have time to set up his business, conduct an on-going local ministry and live a some-what normal kind of life. Except in Ephesus.

Ephesus was different: Paul settled in

Paul spent more time in Ephesus – three years – than in any other city in all his missionary journeys.

The church in Corinth was soon expecting another visit from Paul, but he wrote and said that he needed to stay longer in Ephesus 'because a great door for effective work has opened to me, even though many oppose me' (I Corinthians 16:9). That's the Hall of Tyrannus, a two-year project that couldn't be rushed.

A new opportunity opened in the hall because Jews opposed him in the temple. Then, like now, problems can often be turned into opportunities!

Scholars haHall of Tyrannus. In Christian ministry, Paul spent more time in Ephesus (map I16, 3 years) than anywhere else. The Hall of Tyrannus was a two-year commitment – settling in and working in one place – his largest commitment for any project.

Man with a mission

Until his name was changed at age xx, he was known as Saul of Tarsus.

He was born in the year 6 AD into a Jewish family of high standing – Roman citizenship – in the city of Tarsus, modern-day Turkey (map 24J).

As a teen, his family sent him to Jerusalem to study under Gamaliel, a very prestigious religious teacher, similar to a Harvard education today. When Saul was

Very well educated and connected to leaders of Sanheidren.

In the year or two after Jesus' death, resurrection and ascension, group of believers call the 'way' troublesome. Saul passionate to put an end. Persecute, imprison and even death.

'And Saul approved of their killing him [stoning Stephen, a leader of the church]. On that day a great persecution broke out against the church in Jerusalem, and all except the apostles were scattered throughout Judea and Samaria Godly men buried Stephen and mourned deeply for him But Saul began to destroy the church. Going from house to house, he dragged off both men dn women and put them in prison. Those who had been scattered preached the word wherever they went' (Acts 8:1-4).

One of biggest adversaries of Jesus. His own words:

'I persecuted the followers of this Way [Christians] to their death, arresting both men and women and throwing them into prison' (Acts 22:4).

'Meanwhile, Saul was still breathing out murderous threats agains the Lord's disciples. He went to the high priest and asked him for letters to the synagogues in Damascus [map P26], so that if he found any there who belonged to the Way, whether men or women, he might take them as prisoners to Jerusalem.

'As he neared Damascus on his journey, suddenly a light fro heave flashed around him. He fell to the ground and heard a voice say to him, 'Saul, Saul, why do you persecute me?'

''I am Jesus, whom you are persecuting,' he replied. 'Now get up and go into the city, and you will be told what you must do.'

'The men traveling with Saul stood there speechless; they heard the sound but did not see anyone. Saul got up from the ground, but when he opened his eyes he could see nothing. So they led him by hand into Damascus' (Acts 9:1-8).