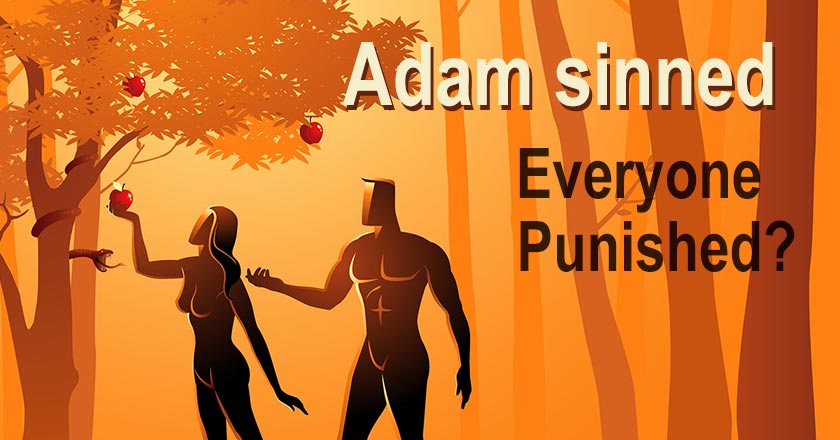 What happened in the Garden of Eden?

In church language, the earth is said to have been 'perfect' until Adam sinned. Accordingly, this site uses the terms 'perfect' and 'perfect paradise' to describe this presumed initial state.

In this study, these terms mean from human perspective, as defined by the Merriam-Webster dictionary: 'entirely without fault or defect ... flawless ... satisfying all requirements ... corresponding to an ideal standard.' In other words, the way WE want it.

From God's perspective, the earth has always been perfect.

What may not seem perfect to us is still perfect to God because He designed the earth for HIS purpose, not for OUR comfort.

God did not create the earth as a perfect paradise

To most Christians, it's heretical to say that the earth was NOT a perfect paradise before Adam sinned, but it's an absolutely true statement supported by scripture and science:

Furthermore, if the entire earth were perfect, then Adam and Eve, part of the earth, would have been perfect and unable to be seduced into rebellion against God.

Science supports the biblical narrative with abundant evidence of enormous convulsions at all stages of life on earth.

The earth has always been a dangerous place

God did not create a static universe but rather a universe of constant change and peril. Physically, the earth is just a tiny part of an unfathomable cosmos that is still expanding and cooling.

We live on a thin crust floating on a gigantic ball of molten rock. Because of curvature, the crust has cracked into pieces (tectonic plates) that collide with each other and reconfigure continents and oceans. The plates thrust up mountains, causing earthquakes and volcanoes.

The entire earth is rotating once daily on an annual orbit around the sun, creating constantly changing weather conditions that cause thunderstorms, lightning, fires, droughts, tornadoes, hurricanes, tsunamis, monsoons, floods, blizzards, and glaciers.

There are flies and mosquitoes in the air ... sharks and alligators in the water ... wild beasts, snakes, and spiders on the land.

Creatures of every kind – even small organisms like bacteria and viruses – create innumerable dangers for us on planet earth.

This is not a multitude of mistakes. There is no evidence from the Bible, science, or history that the earth was ever a perfect paradise without violence and death. Right from the beginning, this is how God intentionally created earth for the first phase of His eternal plan for human beings.

Church tradition says that there was no death on earth before Adam sinned. That means that the earth and everything in it was once immortal.

Unbelievers are puzzled by this Christian position because it's an oxymoron. By simple definition and logic, things that are immortal (never die) cannot become mortal (die).

Christians who believe that the earth was originally perfect and without death cite this verse as authority: 'God saw all that he had made, and it was very good' (Genesis 1:31).

This is the only verse in the entire Bible that speaks directly to the subject. A few other verses are sometimes mentioned, but they don't say that the earth was perfect; see Bible study on Romans 5 and I Corinthians 15.

So from two words – 'very good' – a theological concept was developed by early church fathers which says that the earth was a perfect paradise until Adam sinned ... no discomfort, no problems, no illness, no death. But that's a stretch and an add-on to what Genesis 1:31 actually says.

God simply expressed satisfaction with His creation. He had a plan. He implemented the plan perfectly. He looked at the earth and pronounced it ready to carry out His eternal purposes. That's all those two words say. Anything more is adding to scripture.

Growth and multiplication without death is no paradise

We see cartoon-like pictures of Adam and Eve living an idyllic life without work, discomfort, sickness, accident, or death ... lounging under a fruit tree ... surrounded by animals completely at peace with each other.

These pictures are from imagination and tradition, not from the Bible. They undermine the Bible by putting scripture in the same category as a fairy tale.

When God created the earth, as recorded in Genesis 1, God commanded each kind of life to grow and multiply, and it did!

So, now imagine the earth without any death ... trees, vines and bushes so thick a person can hardly move ... every space packed with animals and reptiles ... hard to breath because air is thick with bugs ... so many animal habitats that it's almost impossible to find a place to sleep ... ground covered with ants and snakes ... clouds of birds in the sky ... animal and bird droppings all over ... water almost solid with organic growth ... Adam and Eve picking reproducing fruit, but what do the carnivores eat?

Unbelievers scoff at Christian naivety for thinking that growth and multiplication is always good, but physical death is always bad.

‍Death is essential for life not only for food but also for preventing overcrowding and suffocation, and for clearing the way for new life.

Death is not a design flaw. God designed both life and death in intricate balance.

See the Bible study showing that sin is not the cause of death.

Not only does church tradition say that the earth was a perfect paradise without death before Adam sinned, but also that Adam, by eating forbidden fruit, ruined the perfect creation.

That is an astounding, even blasphemous, thing to say!

Unbelievers think Christians speak utter nonsense when they say that God created a perfect earth, yet one man ruined it. Was God blindsided? Was it a critical design flaw? How could God make such a big mistake?

In interpreting scripture, the words of Jesus take precedence over all other words in the Bible. What did Jesus say about Adam ruining the perfect creation? NOTHING!! Nothing to say because the ruin never happened! Just church dogma developed long after Jesus' ascended and after the Bible was written.

There is no record in the Bible of Jesus ever even mentioning Adam's name. If Adam's sin caused such calamity on earth, certainly Jesus would have told us.

Christians believe that Adam ruined the earth only because this is what they have been taught by church tradition over the centuries. Sadly, most Christians have never personally opened the Bible to see whether or not this is what it actually says. Most Christians never think about how stupid this sounds to unbelievers and doubters and how tradition has become a major barrier to faith.

SIX INSIGHTS
for an informed answer
TAP TO GET

Tradition and folklore have twisted what the Bible actually says

The Garden of Eden is like a fairy tale to most people, even to Christians, and most don't know that the Bible tells us its time, place, and exactly what happened. Tradition and folklore have added so much to the biblical story that it now almost incomprehensible to doubters and unbelievers. Major theological doctrines have grown out of the story for Jews, Christians, and Muslims.

Adam and Eve may not have been the first humans

TOPIC 1.3 (People before Adam) lists many clues from the Bible that there were people on earth before God placed Adam in the Garden of Eden. Adam was the first sinner, but probably not the first human. Bible credibility is at stake here because archaeology, scientific testing, and DNA analysis show clearly that there was human activity on earth before BC 4000. See the evidence from both Bible and science.

The earth was not a perfect paradise before Adam sinned

See all the Bible verses that tell us that God didn't create the earth as a perfect paradise (from our perspective). The earth as we find it is the way God wanted it. Adam didn't ruin it. Jesus never even mentioned Adam's name. Growth and multiplication without death is no paradise. Death is essential not only for food but also for preventing overcrowding and suffocation, and for clearing the way for new life.
TAP TO GET

TOPIC 1.3.2 (Sin not cause of death) shows that the idea that all death is the result of Adam's sin comes from church tradition, not from any direct statement in the Bible. See the two verses in scripture which have been stretched and twisted to support the idea that the earth and everything in it was once immortal.

The doctrine of original sin is grossly unjust and biblically challenged

TOPIC 1.4.3 (Original sin) shows that the idea that everyone is born guilty for Adam's sin comes from church tradition, not from any direct statement in the Bible. See the four verses in scripture which have been stretched and twisted to support this monstrous idea, and see the harm it has done in driving people away from God. Also, see an in-depth study of Romans 5 and I Corinthians 15.
TAP TO GET

Here's where we combine the six Insights to get an informed biblical answer: What happened in the Garden of Eden?

The Insights here are like pieces of a puzzle. Put the pieces together and see the big picture! Now you'll be prepared to engage intelligently and coherently with anyone about what the Bible says about any major aspect of the Garden of Eden story. Also see reader comments.

Here's where we combine the six Insights to get an informed biblical answer: What happened in the Garden of Eden?

The Insights here are like pieces of a puzzle. Put the pieces together and see the big picture! Now you'll be prepared to engage intelligently and coherently with anyone about what the Bible says about any major aspect of the Garden of Eden story. Also see reader comments.