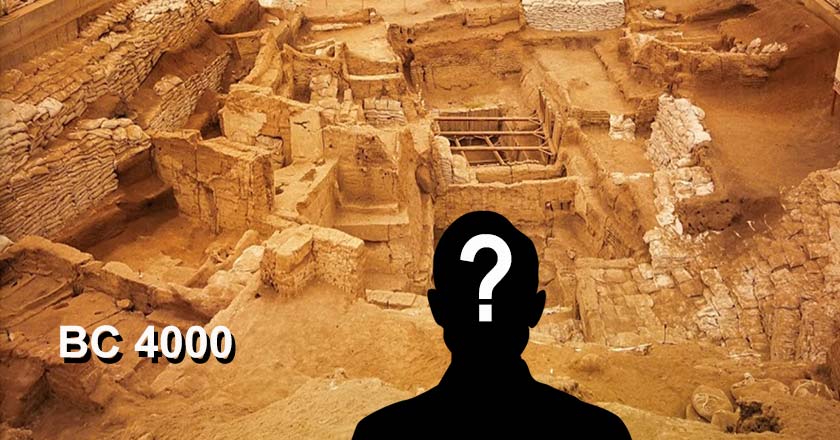 The Bible, history, and science all tell us that the time around 4000 BC was a time of major change on earth, a pivot point when the whole order of life took a new direction:

✦ CIVILIZATION. Primitive cultures were becoming civilized with farming, ranching, mining, specialization of labor, small-scale manufacturing, and trade about BC 4000.

This was a time of synergy as people began learning and working together in community. Populations were becoming centralized with construction projects and governments extending human control over nature and people.

✦ WRITTEN LANGUAGE. Written language systems began surfacing about BC 4000. This was a huge advance over the drawings and symbols previously carved or painted on cave walls.

This was the start of historical records that document events as they occur and survive millenniums of time. Written language was a way to share and preserve technical knowledge. Communication became more precise and nuanced.
‍
✦ GOD REVEALS HIMSELF TO MAN. After billions of years of preparation, something astounding happens! The Creator of the universe reveals himself to man and initiates a personal relationship!!

The relationship brings a major change to the world – from physical only to physical AND spiritual. Now we have God's command, accountability, sin, punishment, and offer of eternal life for humans.

According to Bible genealogies, Adam lived about 4000 BC. See chart here for time calculations based on the genealogies.

Population experts estimate that the world's population in 4000 BC was about 7,000,000, as shown in this composite chart compiled from many sources: 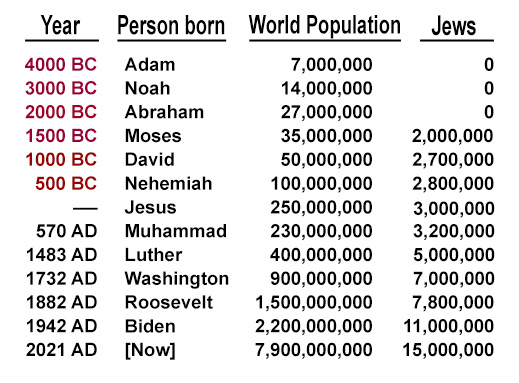 Archaeologists are now unearthing many cities that were already in existence in BC 4000. Today we can see many of the amazing settlements that thrived in the general area of the Garden of Eden (Mesopotamia), evidence of transition from settled villages to urban cities before that time.

An example is Catalhoyak, Turkey. The city was built in stages between BC 5200 and BC 7400. The stratigraphy of 18 settlement layers (over a 2,000-year span) shows its development, reshaping and expansion. The city is so huge and tightly packed – covering 37 acres – that only 5% has been excavated so far (160 buildings) after 60 years of digging. The estimated population was 3,000 - 8,000 people.

Similarly, the biblical city of Jericho, Palestine, was founded approximately BC 10000 and had already been in existence for about 6,000 years before Adam – the same approximate length of time as from Adam to now! Archaeologists have unearthed the remains of more than 20 successive settlements on that site. Bodies of the dead have been found buried under the floors of homes and in the remains of abandoned buildings.

Archaeologists have unearthed thousands of fossils that look similar to modern humans, most called hominids, some dating back several millions of years ago. (For perspective, dinosaurs vanished from the earth about 63 million years ago).

All human remains dated to the Holocene period (approximately BC 10000 to present) are classified by scientists as homo sapiens (modern humans). The fossil evidence keeps growing, and scientific testing methods keep improving, and now there is overwhelming evidence that humans existed on earth long before Adam.

By the time Jesus was born – sometime between BC 6 and BC 4 – every major part of every continent on earth was populated, with the population totaling about 250 million people. If Adam were the first human, that means that all the original world-wide human migrations would have had to occur within a span of fewer than 4000 years ... starting from nothing ... no history or knowledge of the world ... no tools or skills ... brutally hard conditions ...

With the reluctance to move unless forced by climate or enemies, and facing almost unimaginable perils and adjustments, including sailing the oceans and crossing frozen land bridges, these migrations would have taken much longer than a few thousand years.

Scientists once had to reconstruct humanity's distant past only from ancient settlements, bones, and artifacts, but now DNA and RNA are powerful new ways to read genetic code of our early ancestors.

The DNA of thousands of skeletons of people who lived 6,000 to 12,000 years ago has been sequenced and analyzed by computer to show migration patterns and times, showing beyond doubt that humans moved throughout the earth prior to BC 4000 (before Adam).

More than a dozen scientific methods are used to determine dates of bones, artifacts and man-made structures uncovered by archaeologists. Cross-validation can now be done on the same object with various testing methods.

Some people say that scientific dating is irrelevant because God could have created the universe with 'apparent age' (everything just looks old), but see the study on this site which shows why 'apparent age' is a flawed argument.

Bible genealogies show that Adam lived about 6,000 (maybe 10,000) years ago, but modern archaeology shows that humans have been on earth for 40,000 years or longer. How can we explain the discrepancy?

Here's where we combine the four Insights to get an informed biblical answer: Were there people before Adam?