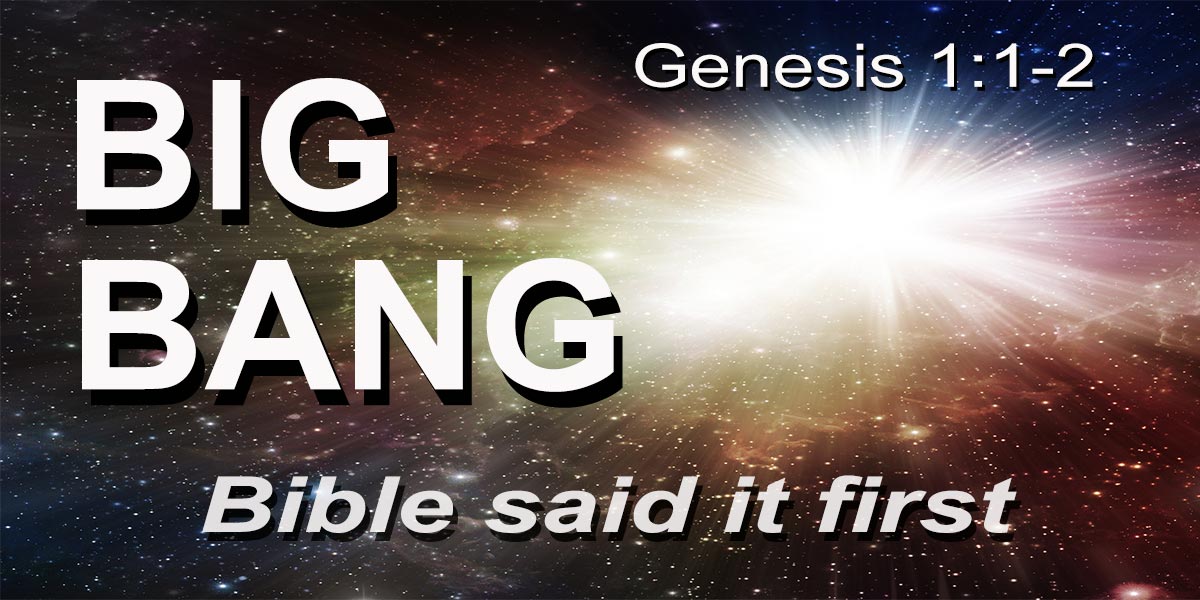 INSIGHT 3
Science catches up with the Bible

What is the Big Bang theory?

'In short, the Big Bang theory states that all of the current and past matter in the Universe came into existence at the same time, roughly 13.8 billion years ago. At this time, all matter was compacted into a very small ball with infinite density and intense heat called a Singularity. Suddenly, the Singularity began expanding, and the universe as we know it began' (phys.org).

For lack of a better secular term, scientists say the 'Singularity' when referring to the inconceivable power and energy in the Big Bang. Christians say 'God.'

The Big Bang theory is now generally considered to be settled science and is taught in all public schools and universities throughout the world.

'Theory' in the scientific sense means more than just an idea, guess, or proposition. It means an explanation, a governing law of physics, like the Theory of Gravity or Einstein's Theory of General Relativity.

What scientists formerly believed about the origin of the universe

One hundred years ago, most scientists held to the Steady State theory that the universe has always existed. They scoffed at the Bible for saying the universe had an instant beginning.

But in 1927, Georges Lemaitre, a Belgian Jesuit priest and astronomer, proposed an expanding model for the universe to explain the observed redshifts of spiral nebulae.

By 1929, Edwin Hubble had data from new telescopes to support Lemaitre's model. He found that galaxies are receding in every direction at velocities directly proportional to their distance from the earth and each other.

These were some of the first big rumblings in the scientific community questioning whether the Steady State theory might be entirely wrong and whether the earth might have had a beginning.

About Fred Hoyle: A great story for Christians to tell

In the 1940s, Fred Hoyle was an astronomer and lecturer at Cambridge University and was esteemed as one of the world's leading experts on the origin of the universe.

He was explaining the Steady State theory in a BBC broadcast on March 28, 1949, when he mentioned that a new theory was being proposed by some radical astronomers 'based on the hypothesis that all matter in the universe was created in one big bang at a particular time in the remote past.' He argued against the theory and said it was 'irrational and outside science.'

That's the first time the term 'big bang' is known to be used for the dramatic shift that would soon take place in our understanding of the universe.

Hoyle used the term in derision because he and nearly all astronomers and cosmologists at that time thought it was ridiculous to think that the universe came into existence at a single moment in time.

In less than 40 years, by the 1980s, as a result of better telescopes and supercomputers, the entire international scientific community switched from Steady State to Big Bang.

There is now evidence beyond dispute that the universe began instantly and is still expanding.

Most Christians seem to think that the Big Bang is a step away from God, but as this Bible study shows, it's actually a step closer to God.

This story gives credibility to the Bible

Science just discovered what the Bible has been saying for more than three thousand years in its opening statement: 'In the beginning, God created the heavens and the earth' (Genesis1:1).

This story of recent scientific acceptance gives dramatic credibility to the Bible. The Bible has been right all along! There is no way the ancient writer of Genesis could possibly have conceived and written about this theory without some kind of direct revelation from the Creator.

Why haven't Christians heard this story?

One would think that churches would be telling about this transformative change in scientific understanding, strengthening the Bible, but most Christians have never heard about it.

This is a sad commentary on an underlying hostility between church and science, so strong that most pastors won't bring science into the conversation even when new findings support the Christian position.

Ironically, while churches kept quiet, The Big Bang Theory, a popular TV sitcom from 2007-19, made tens of millions of Americans aware of the change, but without making any connection to God or the Bible.